There isn't a lot to say about this scanner. It has been out for several years now and as technology goes, there are bigger and better scanners out there. But for the money that the 2052 is selling for now, you would be hard pressed to find a better deal.
The very fist thing I noticed about the Pro-2052 is the weight. The 2052 is light as a feather. It is almost scary how light it is. It makes you worry there isn't anything inside, but there are lots of features packed into this lightweight scanner. I picked up the 2052 from radioshack.com on Christmas day 2005 for 10% off the discounted price of $99.97 which is $89.97 and got free shipping. I thought it was too good of a deal to pass up.
The newer versions of this scanner can scan both conventional and trunking system at the same time, whereas the older versions you could scan conventional or you could scan trunked but not both at the same time. You can tell what version you have by looking on the bottom of the scanner, their should be a date code (the date code on the box may or may not be correct). It will read something like 06A04. The first 2 digits are the month and the last 2 are the year. So, this scanner was made June of 2004. Any scanner made after April of 2003 (04A03) will trunk track and scan conventional channels simultaneously. Any scanner made before this date will either trunk track or scan conventional channels, not both at the same time.
The scanner is well constructed in my opinion regardless of it's weight. The scanner is housed in a solid plastic case. The buttons and knobs feel nice and rugged (although they seem to attract lint because they are rubbery). The LCD screen is easy to read, however it is different from what is shown on the box or on the RS website. It has an orange back-light and is plenty bright enough. The receiving range of this scanner is nice with Mil-Air, 800 (trunking), etc. The frequency coverage is the main reason I chose this scanner over the Pro-2054. The only thing I wish the 2052 had that the 2054 does have is the Attenuator feature which blocks strong signals.
The Pro-2052 is easy to program as long as you don't mind punching in frequencies. There are software packages available for the 2052 and the scanner is computer controllable, but I chose to program by hand. This scanner has 1000 channels divided into 20 banks (50 channels per bank). Having the 20 banks is really nice if you like to divide up your frequencies as I do. I use the 2052 primarily for VHF-High conventional monitoring. I have the first 10 banks divided up into my local counties. This way I can turn banks on or off to monitor specific counties in my area.
The Pro-2052 features the SAME weather feature, which alerts you when a severe weather watch, warning, advisory has been issued for the county or counties you input into the scanner. I really like this feature and have used it on all of my scanners that have this capability.
The scanner features a scan delay feature which pauses the scanner for 2 seconds after every transmission. I realize that when this scanner was designed, this was probably a nice feature. But for me, I would like a longer delay. I use a BCD396T and have all of my channels set to a 5 second delay. I feel 2 seconds just isn't long enough of a delay.
The Pro-2052 does okay on a base antenna. I have my 2052 hooked to the Scantenna and it pulls in VHF-High band really well but is really taken over by interference at times and makes it hard to use effectively. The Scantenna overloads the little scanner. I have to admit that I miss having text or alpha tags on this scanner. There is a software package that will allow you to alpha tag each channel and control the scanner via the computer, but for my use, this isn't really a good option.
ScannerMaster sells the programming cable for the 2052. It is the same cable that is used with the BC780XLT, BC785D, BC796D, BCT8, and BC898T. There are a few software packages available, one from scancat and one from pro2052.com are the two that I know about. I haven't used either so I can't comment on them.
The Pro-2052 is a nice scanner that has good receive. For $100 or less, it is a great deal. Anything more than that and you can find a scanner with more features. There are obviously better scanners out there on the market, however for a back up unit, this is a good scanner. The audio is plenty loud and is clear, no matter what volume setting you have. This is the first base scanner I have owned, and for the most part I am pleased with it. I would like to upgrade to a Pro-2096 eventually because of the Digital Capabilities. All in all this is a good scanner with good features for the price. The Pro-2052 debut at around $300, so getting it for under $100 is a steal to those who paid that initial release price.
written: 01/21/06 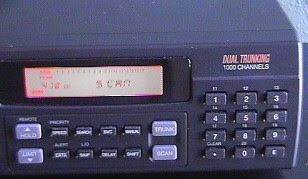