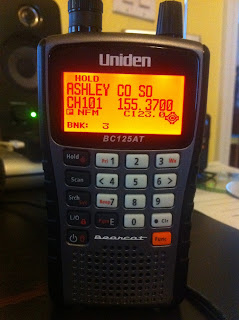 I've had the BC125AT for about 3 days now. Comparing it against my Icom IC-R6 on VHF-Air band, the R6 is more sensitive, but the R6 is a great receiver. The BC125AT isn't far behind though. I have been using the scanner with a Diamond RH77CA antenna. It does a really nice job on Air band. I am impressed by the BC125 and am glad I made the purchase.

No ATT button? That is about all that is missing on this great little radio. The plastic it is made of feels a bit cheap but hey it's a $140 scanner. It's not terrible but doesn't seem as solid as say a BC396T or the Icom R6. Feels similar to the BC246T to me. I picked mine up on Amazon.com for $139 with free shipping.


ALPHA TAGGING!!!!! I am not sure I could use a scanner without it. I am glad Uniden put in this feature on this sub $140 scanner! It makes all the difference in the world. I like how they implemented it too! You can see your alpha tag, Channel #, Frequency, Mode, PL Tone, and signal strength on the screen.

SAME weather alert codes would have been a nice feature to have. However, the general weather alert (which picks up the 1050 hz tone) will suffice.

Close Call DND and Priority DND are awesome. I have gotten several hits on CC. The DND (Do Not Disturb) feature checks for signals only when the scanner isn't actively receiving signals so it doesn't interrupt a transmission. Other scanners you will hear a pause in the audio every 2 seconds while the scanner checks for the Priority.

The large display is a nice feature. I wish I could dim the back light though. It isn't overly bright but it would be nice to save the batteries. It seems to use batteries rather quickly. I am scanning using back light on all the time. I am only getting about 4-6 hours out of a set of fully charged (and fairly new) Energizer 2300 mAh. Compared to my little R6 which runs for 10 + on 2 of the same batteries with back light on full time, of course it is a much smaller LCD to power also. Not a huge deal since I have a backpack full of charged batteries.

The scanner is very easy to program and manipulate. I have yet to break out the Owner's Manual. I've programmed about 200-250 channels with tags and PL tones by hand so far. It is tedious to program by hand but not hard at all.  It is just a little time consuming.  I downloaded ARC125 demo. It is a great piece of software and would be very handy, however, I am a tightwad and don't want to spend $25 on something that in all likelihood I would use 1 time. Uniden does provide programming software free of charge.  It doesn't provide RadioReference Import but it may be a better solution than trying to program by hand.

Audio is very good. The speaker has a clear tone and loud enough in the car to be heard over road noise. Temporary lockout is a great feature when a channel has interference. This is where I would like to have an ATT feature. But the Temporary Lockout works in this instance for me.

I have a dedicated 800 MHz P25 scanner. The 125AT makes a great 2nd (or 3rd, or 4th, or 5th ) scanner. I don't miss 800MHz coverage on this scanner because I am using it for Air band and Mil-Air mostly and some local VHF-High public safety. The BC125AT reminds me a lot of the BC246T even though they have different management systems.

What are you waiting for, go out and buy yourself one!
Posted by Unknown at 11:07 AM